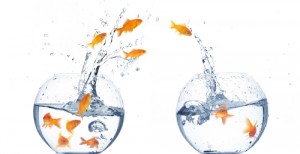 2014 has been an interesting year in the life of this QA Manager. This time last year, we were in a full court pressto prepare the lab to move into our new facility. As we ushered in the year, the facial twitch caused by transferring equipment, personnel, and systems was deeply present. Of course, moving a lab is not a new concept. It was, in no small scale, a big deal for our team.

I was reminded of that this week while searching for an email that I sent at the beginning of the year. Plenty of labs have relocated, mostly successfully.   But that doesn’t negate the fact that the project was extremely challenging. Specifically, the instrumentation that we employ could not simply be loaded onto the back of a pick-up truck. It took no less than a full day to prepare each instrument to move, another day to crate, forklift, and haul each instrument to the new lab, followed by two days of installation. The coordination involved in moving all four of our instruments could be a full discussion of choreography and agility.

As I scrolled through my email traffic early 2014, one thing was apparent. As a team, we were on fire.

When we entered into the project, we had a strategy.   We had a schedule. We had a punch list. Most importantly, we made a commitment to stay agile. We new from the start that through all of the planning, the schedules, the punch lists, there would be surprises. There would be crises. How we reacted would be the key to our success or failure.

There came a point where, despite our best laid plans, we were forced to adopt some of the rules of improv. There were not a lot of options to push back against the surprises that we encountered in the face of the move. But by remaining flexible, we were able to maintain some sense of sanity, and even have a bit of fun in the process (Although we would not have admitted that to anyone at the time).   There was also a component of trust that was necessary. Everyone on the team had to trust that the punch list would get done.   We had to trust that if a crisis developed, it would be identified early enough for us to adapt.

The entire process was primal. There was no option other than complete candor, and action. We had to be honest with ourselves, and the process. If something wasn’t working, we had to adapt and adjust, and we had to do it quick.

Today, the dust has long sense settled, but looking back, I can honestly say, the project was a success.   Of course there were crises.   There were changes in the schedule. THERE WAS AN ICE STORM FOR GOODNESS SAKE! In the end, we completed the move and returned to full capacity faster than anyone had anticipated.

It doesn’t matter the scale of the victory. The power is recognizing that it was, in fact, a victory. Savor it. Remember what the bright spots. Chances are they seemed to be tough spots at the time. Use that success to push you through the next challenge.

What challenges has your team overcome this year that have pushed you on to the next great thing?